From the beginning of this world, this is the stereotype that women should do household works only but outside jobs. Thinking, mindset furthermore circumstances have changed with time but all the facilities importantly discovered and designed for men. Is this world only developed and created for men? do men’s world ignores women?

PerkyTrendz brings a vast and most interesting topic of today. To figure out the above question, note a few things as follows:

May you be agreed with this observation, you can check with your smartphones. Companies design the new smartphones that are bigger according to a man’s palm. The average length of a smartphone today is 5.5 inches.

2. Car is only designed for your father, husband, and brother

References for a car designed according to a male body. Companies perform crash tests on male dummies, that’s why can women be 50% more harmed than men in accidents.

Mostly development and testing of voice recognition software done according to a male voice, that’s why they can understand male voice 70% more accurately than the female voice.

You may have noticed, women feel sick when wearing VR headsets. It doesn’t happen with a man instead. Women are more sensitive than men, hence women got sick promptly. Women may have the most 2 VR games. In this situation as well, men’s world ignores women.

5. Her heart is different from a man’s heart

Men and women have different symbols for Heart attacks but they got the same treatments. Testing of this treatment done according to a male body hence it goes wrong for a female body. Researches for cancer treatment performed according to men; though there have been more cases of ‘breast cancer’ in the industrial world for 50 years.

Women are everywhere, being it technology or agriculture. Today women have involved in more than 70% agriculture work, but how many women have managerial or administrative rights for their land or farm? Which company has made their tractors according to a woman? Even when we think of a farmer, we have a male farmer in mind.

7. Why only men references?

In our society, men mostly represented thoughts and plans, being it administrative rights, decision-making or rights on the workplace. Things have mostly referenced for men so that they would be useful for them only. Off course! there are certain things that have proposed in the real world for women e.g. car’s start button, small phone screens, etc. So more facilities need for women as well.

There are many women astronauts, but space suits are again tested and provided as per a male astronaut body. Women are making a mark in space as well but sometimes ‘space suits’ become hurdles between them and space.

In conclusion, there are many more cases where the man modeled as a reference. Slowly, Things are changing but still, there are some mentioned and other facilities that should do considered for women as well. Hence, the world should not stand biased, man-oriented or woman-oriented. It should stay a place of equality. 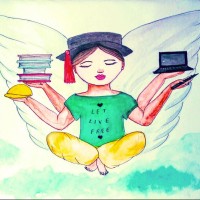